Memories From High School: We Need Your Stories!
The Reunion Committee would like to publish for our 50th Class Reunion a book of fond, funny memories when we were going through high school.  Please send debbie@cyclones1970.com a short paragraph or two of something funny, interesting or just a fond memory you had during our years at Ward High School 1966-1970.

This should be an interesting read for all of us. After all these years, maybe some of those dark funny secrets will finally come out.  We know you are going to have to go way back, but put your thinking cap on and start writing!  Don’t forget about Wyandotte Swim Club (photo courtesy of this Facebook Page), “buzzing” Peter’s Drive-In, the slumber parties, mixers, football games, etc. The examples below were submitted by Mark Ashley. 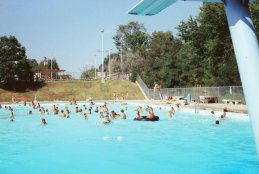 Midwest Oil
A lot of us had summer jobs while in high school. I was very lucky to work at Midwest Oil. There was a great group of people and we all got along well. Rudy was the foreman. He smoked a pipe that fit perfectly in a space between his front teeth, like Popeye the Sailor. A big guy they called Junior could manhandle a 35 gallon drum of motor oil all by himself. Hank was an expert in running the canning machine. And another guy whose one response to anything you said to him was “Well I’ll say.” The rest of us included Steve Maurin, Bob Brockenfelt, Mike Curl and I. We usually boxed up cans of oil and wheeled them out with a two-wheeled dolly. Whenever we got behind with boxes rolling down the conveyer, Rudy would step in and glue up a couple of boxes for us, leaving us further behind than we were before. But his heart was in the right place. The highlight of the day was a visit from the “roach coach.” It would pull up around 10am in the parking lot and we got a short break to go out and get a snack. I would get a donut and coffee while Steve would get a chili dog and a Coke. Wow, he must have had an iron stomach. Rudy would light up his pipe and sing “Little Junior, little Junior.” Yes, those were the days. That was a great place to work.

Sister Constantia
We had a class with Sr. Constantia, probably geometry.  She usually kept the door to the classroom closed, but students walking down the hall would knock on the door and run.  She would go over and open the door and no one would be there and she would get really steamed.  So she finally started standing over by the door, and one day there was a knock.  She flung open that door, grabbed the unsuspecting student standing there, pulled him in and went medieval on him.  He was able to hold up his hand and say “I’ve got a note for you from the office.” So she brushed him off and sent him on his way.

Bob Brockenfelt’s Old Chevy
There were around four or five of us in Bob Brockenfelt’s old Chevy.  We decided to sneak into the State Drive-In and see The Green Berets with John Wayne. The plan was to throw the spare tire and jack into the back seat and

everyone would pile into the trunk except for the driver, Bob. Great plan, however one person DID NOT want to get into the trunk. Unlocking the trunk was not easy so Bob showed him the trick to it and there we went. At the drive-in entrance the cashier was suspicious with only one person in the car and the spare and jack in the back seat. So the driver told him the trunk lock was broken and he couldn’t get into it.  He even offered the keys to the cashier so he could try to open it. Wow, brilliant. So we get in to see the movie and (big surprise) our driver can’t open the trunk. We tell him to keep trying. Finally, after about 30 to 40 minutes he gets it open, but we missed part of the movie and we were really mad at him for taking Bob’s place at the wheel.

Same Old Chevy
The hood latch is broken so the hood has to be tied down with a piece of rope. Bob and I are driving South on the 18th Street Expressway to his house, going about 60mph. The rope comes loose and the wind suddenly throws the hood open and back onto the roof of the car.  So hard that the roof partially comes down onto our heads.  Bob can’t see where he is going so he pulls to the shoulder and comes to a stop.  We get out, and peel the hood back over the engine but it’s all mangled.  So we get up on the hood and jump up and down to flatten it out. Then we laid in the front seat and pushed up the roof with our legs, and that’s when the windshield falls out onto the street and breaks up. We slowly limp to Bob’s house. The car is so awful looking, as we pull into his parent’s driveway his Mom comes running out thinking we were in a terrible wreck. Nope, the rope came loose. Bob ended up selling the car for $30. It had a $30 tape player in it.

We’d Love Your Help!
This site will always be free, but please consider donating! This site is maintained, created and contributed by volunteers. However, there are costs to maintaining a website. Donations to the site will go towards domain name registration, web server usage and other web services currently being funded by SJ Insights and Debbie Johnson. If you enjoy what this website has to offer in terms of providing a legacy for our class and an archive of our reunions and other activities, then please consider donating. Even a little donation will help. Any funds provided exceeding Web expenses will be used for Reunion related expenses. Thank you in advance. Donate now via PayPal (accepts all credit cards).